Having regularly stumbled across the owners several times on conventions over the past few years, it was natural to go visit their newly opened Manga-T Metz manga café – second time I’m visiting one, and the place happens to be not too far away from Luxembourg. I invite you to visit it as well if you’re in Metz someday! (yes, it seems that I’m posting only travel blog articles as of late… promised, we’re going back to artwork next week;)

Melli and Usu, the cafe’s eccentric and lovable owners.

At Manga-T manga cafe, you can read manga, or taste various Japanese snacks and beverages while watching an anime on their big television screen. After several years of planning, a successful crowdfunding campaign, and the help of their “big brother” Manga-T Dijon, the shop was finally launched in November. All the contributors got their name on a big wall picture in the cafe itself, and I just discovered that I have deleted the photo before posting it… sorry 8D

The cafe is divided into three areas: first the “restaurant-bar” place, then the counter and merchandise place where you can get both Japanese snacks as well as creations from local artists, and the library area where you can find over 4.000 manga. For the bonus parts to make the clients feel at ease, they also have a super cool Japanese toilet with heated seat (I didn’t try it though because of a former trauma with those things… I once made water shoot throughout the entire room, so I’ve eventually learnt to refrain from touching random buttons XD), as well as a big television screen in the bar area, and even a small traditional table where you can sit on cushions on the ground.

Concerning the food, there’s a huge variety of snacks and beverages you can try. I ordered a Sweet Potato Latte, which is apparently a Korean specialty, and which tasted like vanilla milk while being violet. Being a total fan of taiyaki, I hoped to get one, but discovered that they are only available on Monday, Tuesday, Wednesday and Saturday – the other days are for mochi (which are yummy as well – especially the strawberry ones). So, if you’re going for the taiyaki as well, remember to get there on the correct days!

Wanna give it a try? Whether you’d like to have a nice time reading, eating, meeting with friends, or just to discover a new place – the next time you’re in Metz, make sure to stop by, it’s worth your time ; )

Open every day 7/7 from 14h-19h
For more info, opening hours and photos, visit the café’s Facebook or Instagram! 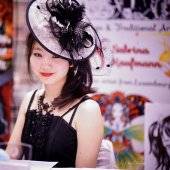 Hi there! I’m Sabrina Kaufmann, mangaka, illustrator & creative entrepreneur from Luxembourg. My goals? Making you dream with beautiful illustrated stories, and supporting aspiring artists to monetize their art. By going all in with my own dreams and constantly striving to become a better creative, I hope to inspire and support you in your own artist journey, too!

This site uses Akismet to reduce spam. Learn how your comment data is processed.

My goals? Making you dream with beautiful illustrated stories, and supporting aspiring artists to monetize their art. By going all in with my own dreams and constantly striving to become a better creative, I hope to inspire and support you in your own artist journey, too!

Do you like what I do and want to see more? Join monthly or make a donation for extra privileges!